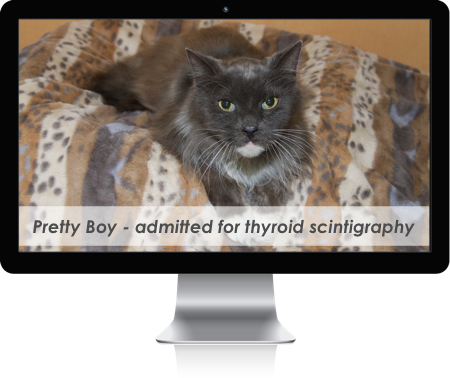 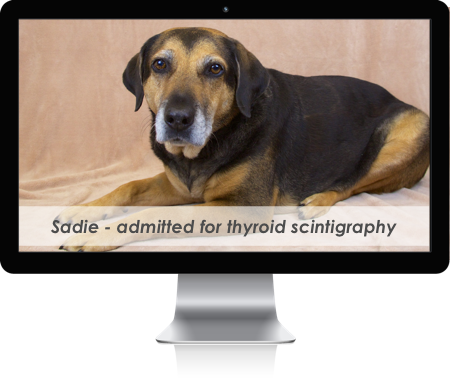 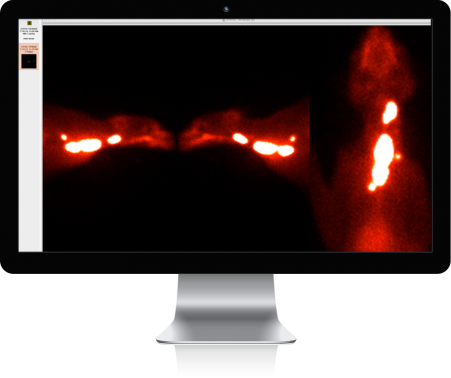 Thyroid Scintigraphy provides a visual display of functional thyroid tissue following the administration of a radionuclide that concentrates in thyroid tissue. Thyroid scintigraphy can provide valuable information regarding both thyroid anatomy and function and can play an integral role in the diagnosis and management of thyroid disease. Because of the equipment and radioisotopes used, thyroid imaging is not generally performed in general veterinary practice in the United States; however, it is available at most veterinary colleges and certain veterinary referral institutions.

The radionuclides commonly used for thyroid imaging are isotopes of iodine (principally 123I and 131I) and technetium as pertechnetate (99mTcO4-). The choice of isotope is governed by various factors including the purpose of the scan and cost constraints. Other radioisotopes of iodine are not generally used for imaging studies because of in-appropriate half-lives, unsuitable photon energies, or excessive radiation dose from particulate emissions. Like stable iodine, radioactive iodine is actively concentrated or trapped by the thyroid gland and is subsequently incorporated into thyroglobulin (organification). The pertechnetate ion is also trapped because its molecular size and charge are similar to iodine; however, it is not incorporated into thyroglobulin. Pertechnetate is also concentrated in the salivary glands and gastric mucosa.

Although thyroid scans obtained with radioiodine and pertechnetate show similar radionuclide uptake distribution on both normal and hyperthyroid cats, the technical quality of pertechnetate scans is usually superior. Although 131I is inexpensive and readily available, its long haIf-life and high radiation absorbed dose due to beta particle emission make it unsuitable for routine scanning. Moreover, the 364 keV photon emitted by 131I is poorly collimated by the scintillation camera resulting in relatively inferior images compared with 123I and pertechnetate. Unlike 131I, 123I does not release ß (beta) particles, has a short half life, delivers a low radiation absorbed dose, and emits lower energy photons (159 keV). The major disadvantage of 123I is its expense, which limits its use in veterinary patients. Pertechnetate is readily available and relatively inexpensive and is considered by many authorities to be the radionuclide of choice for routine thyroid imaging. It has a short half-life, emits a low-energy (140 keV) photon well suited to scintigraphy, does not undergo beta decay, and delivers the lowest radiation absorbed dose to the thyroid of the available radionuclides. Because of the low radiation exposure, higher doses can be administered in order to reduce the time required to complete the scan. This is an advantage in veterinary patients, obviating the need for sedation or anesthesia in virtually every case. Early maximal uptake of pertechnetate allows rapid, high-resolution imaging with multiple views 20 minutes after administration, although later images may be of better quality because of reduced background activity. In contrast, the earliest imaging times for 123I and 131I are 4 and 24 hours, respectively. Finally, antithyroid drug therapy with methimazole or propylthiouracil need not be discontinued before thyroid imaging with pertechnetate because these drugs do not inhibit the trapping of the radionuclide by the thyroid gland. In conclusion, shorter and earlier scanning time, equal or superior image quality, favorable radiation dosimetry, ability to obtain scans during antithyroid drug therapy, and lower cost make pertechnetate the preferred radioisotope for routine use.

By far the most common reason for thyroid scintigraphy in veterinary medicine is the evaluation of cats with hyperthyroidism. Thyroid scintigraphy is particularly useful in cats without palpable thyroid enlargement. Scintigraphy of thyroid tumors in dogs can provide information regarding both functional status and extent of disease and have important implications for treatment and prognosis.

On the ventral view, the normal canine and feline thyroid lobes appear as two, well marginated areas of radionuclide uptake in the cervical region. The intensity of pertechnetate uptake by the salivary glands is comparable to that of thyroid tissue. When whole body images are obtained, pertechnetate localization in the stomach and urinary bladder is observed, the latter due to urinary excretion.

For thyroid imaging, the cat is restrained with the ventral aspect facing the gamma camera. In most cats, the ventral view alone will provide the necessary diagnostic information. In other animals, additional views (lateral and oblique) may be necessary, particularly when surgery is planned and the ventral view fails to conclusively show whether one or both lobes are abnormal. Radionuclide uptake is enhanced in cats with hyperthyroidism and the intensity of the thyroid radionuclide uptake is clearly greater than that of the salivary glands. The distribution of radioactivity through-out the affected tissue may be homogeneous or heterogeneous. Unilateral thyroid enlargement and increased uptake of pertechnetate occurs in approximately 30% of cases. The contra-lateral normal lobe is completely suppressed secondary to suppression of TSH secretion by the autonomously hyperfunctioning lobe and cannot be seen. In about 70% of hyperthyroid cats, enlargement of and increased radionuclide uptake in both lobes is aparent. The lobes may be similar in size and location or unequal in size, with the larger lobe often displaced caudally toward or into the thoracic inlet. In 15% of cats with bilateral involvement, one lobe is approximately normal in size and position and could be mistaken for normal during surgery if judged on gross appearance alone. In the hyperthyroid cat, any uptake by a thyroid lobe indicates that the lobe is abnormal and should be excised during surgery. Thyroid imaging is particularly useful when the thyroid gland cannot be palpated; in some of these cats the affected lobe is displaced caudally. Occasionally, hyperplasia involves ectopic thyroid tissue as well, and the extent of ectopic tissue involvement as shown by scintigraphy may be extensive. In these cases, surgical excision of all abnormal tissue is unlikely and radioactive iodine therapy is the treatment of choice. In the rare cat with thyroid adenocarcinoma, scintigraphy is a valuable means of detecting regional or distant metastases. Multiple foci of increased uptake are usually observed extending down the neck into the thorax and represent lymphatic spread of the tumor or involvement of ectopic tissue. Pulmonary metastases appear as foci of enhanced radionuclide accumulation within the lung fields.Scintigraphy can be used to help estimate the volume of hyperfunctional thyroid tissue to aid in the calculation of a therapeutic dose of 131

In contrast to cats, most thyroid tumors in dogs are malignant and most affected dogs remain euthyroid. On thyroid scintigraphy, tumors are of various sizes, with irregular areas of radionuclide uptake in the cervical region and heterogeneity in the distribution of radioactivity. Since hyperfunctional tumors are uncommon, the degree of uptake by the tumor is usually not increased. With pertechnetate, the ratio of uptake of thyroid to salivary glands varies depending on the functional status of the tumor. Some tumors have minimal to no uptake of isotope (“cold” lesions); these tumors are usually of the anaplastic type (or, rarely, medullary C cell carcinomas). These dogs may be hypothyroid, owing to destruction of normal tissue, if both lobes are involved. Hyperfunctional tumors associated with hyperthyroidism are occasionally encountered in dogs. These thyroid tumors appear as moderate to extensive areas of increased tracer uptake (and the dogs will also have normal to high values for thyroidal percent radioiodine uptake). In some dogs, areas of normal to decreased tracer uptake are interspersed with hyperfunctioning areas. The intensity of the thyroid image is greater than that of the salivary glands on pertechnetate scans. Thyroid scintigraphy can detect ectopic tumor tissue and differentiated regional and distant metastases, occasionally confirming pulmonary involvement not evident on thoracic radiographs. This is of obvious prognostic value. Differentiated metastases can be treated by radioactive iodine therapy.

Congenital hypothyroidism has been reported in dogs and cats. Underlying causes include thyroid dysgenesis and inherited iodination defects. Thyroid scintigraphy with pertechnetate can readily differentiate between the two because animals with thyroid dysgenesis have minimal uptake of radionuclide in the anatomic region of the thyroid gland, whereas animals with iodination defects have enlarged thyroid lobes with normal or increased tracer uptake. The diagnosis of iodide organification defect is confirmed by an abnormal perchlorate discharge test.